Prior to the entry of the United States into the war after the attack on Pearl Harbor in December 1941, the Army had only a few tanks. During the Louisiana Maneuvers in September 1941, it used trucks with the word "tank" painted on their side. Even after Pearl Harbor the 10th Armored Division did not have any tanks, so crews trained by marching down roads in groups and executing orders as if they were in tanks.

The Light Tank M2 series was the most important pre-war US tank. These light tanks were mechanically very reliable, with good mobility. However, they had a high silhouette — from the use of an air-cooled radial engine for power — and poor armor. Only a few saw combat, on Guadalcanal. Their importance lies in the fact that they formed the basis for the much more successful Light Tank M3 (a.k.a. 'Stuart' in British service) series beginning in 1941. The M3 Light Tank was an improvement of the M2 Light Tank, with heavier armor and a 37 mm gun. From the M3A1 version, this gun was gyrostabilized.

The new medium tank just entering production in 1940 was the M2 Medium Tank series. This was a poor design with thin armor, a high silhouette, a 37 mm main gun and seven machine guns.

From 1940, new tank designs were prepared. The Battle of France had shown the importance of medium tanks. The British Army sought to have the US manufacture British designs, but the US refused, offering instead to share the output of US factories building US designs. The United States Army had a requirement for a medium tank with a 75 mm gun, and developed the M3 Medium Tank as an interim design. The medium M3 tank was intended to quickly get a 75 mm gun into the field, pending the design of a tank with a 75 mm gun in a fully rotating turret. The British immediately ordered the M3 Medium Tank for their own use as the 'Lee', and some with modifications to their requirements as the 'Grant' (most obviously carrying a different turret).

By February 1942, American civilian automobile factories only made weapons and military vehicles. Automobile manufacturers such as General Motors and Chrysler used their experience with mass production to quickly build tanks. The country manufactured as many tanks in the first half of 1942 as in all of 1941, with 1,500 in May 1942 alone. American production not only equipped its forces, but through Lend Lease also supplied all the tank needs of the free French (after 1942) and Chinese. By 1944 most British units were also equipped with US-built tanks. Finally, the US supplied over 8,000 tanks to the USSR, half of them the M4 Sherman. Similarly to the Soviet Union, the United States selected a few good basic designs and standardized on those models. Given the lack of tank design and production experience, it is remarkable that the United States designs were as good as they were.

The first tanks of the United States to see combat were the Light Tank M3. They were deeply flawed in many ways, yet the M3 Light ("Stuart") and M3 Medium ("Lee" or "Grant") were the best tanks available to the Western Allies and were superior to many of their German counterparts in armor protection and firepower. The Light Tank M3 was about as well-armed as the British cruiser tanks with 2-pounder (40 mm) guns in the desert, yet was much more reliable mechanically. Its 37 mm main gun was more powerful than the main guns carried by German reconnaissance tanks. The name given by the British to the Light Tank M3 was 'Stuart'; a nickname used was 'Honey'. The M3 and its improved derivative, the Light Tank M5 series, remained in service throughout the war. By 1943, its 37 mm gun was obsolete, but no better replacement was available. The Light Tank T7 design was proposed as a successor in 1943, armed with a 57 mm gun and with better armor; however, the design was never standardized for production.

The appearance of the M3 "Lee" medium tank in the summer of 1942 finally gave the British a larger supply of medium tanks than they could otherwise have hoped for. Although poorly designed, with a very high profile, it was produced in great numbers and was very effective when engaging targets other than enemy tanks, such as infantry and gun positions.

The M3 Medium had the significant disadvantage of its 75 mm main armament being mounted offset in the hull meaning that it could not take hull down cover and use its main gun at the same time. It had a fully traversable turret with a 37 mm cannon as well, but the turret combined with a hull gun gave it a very tall profile. The United States 1st Armored Division also employed the M3 Medium in Africa. It was a stopgap solution, never intended to be a design of major importance. In American and British service the M3 Medium was phased out at the end of the North African campaign. It continued to serve in the Red Army for some time, and in a single campaign in the Pacific. Red Army crews nicknamed it "grave for seven brothers" referring to the seven-man crew.

The most important American design of the war was the M4 Medium Tank, or "Sherman" in British service. The M4 Medium became the second-most-produced tank of World War II, and was the only tank to be used by virtually all Allied forces (thanks to the American lend-lease program); approximately 40,000 M4 Mediums were produced during the war. M4s formed the main tank of American, British, Canadian, French, Polish and Chinese units. The M4 was the equal of the German medium tanks, the Panzer III and Panzer IV, at the time it first saw service in 1942. The Red Army was supplied with about 4,000 M4s. The M4, although reliable and easy to maintain, was already outgunned by the time the US encountered the up-gunned and up-armored German medium tanks in Italy and Northern Europe (the Panzer IV and various German self-propelled guns) and by late 1943 the arrival of German Panther and Tiger I were even graver threats due to the range, accuracy and penetrating power of their main guns. While it is commonly believed that the Sherman had a tendency to explode catastrophically due to their use of petrol fuel, this is incorrect (almost all tanks used petrol in WWII, excepting Soviet tanks). The Sherman suffered from poor ammunition storage. Welded-on appliqué armor and water jackets were added to combat the problem. A U.S. Army study in 1945 concluded that 60–80 percent of the older dry-stowage and 10–15 percent of wet-stowage Shermans burned when penetrated. The Sherman gained grim nicknames such as "Tommycooker" from the Germans, who called British soldiers "Tommies".

Technically, the M4's design was capable of handling larger guns than the 75 mm and 76 mm guns with which they left the factory. The British fitted Shermans with the more powerful Ordnance Quick Firing 17 pounder (76.2 mm) gun, a variant known informally as the Firefly. By the time of the Normandy campaign, the M4 had become the workhorse tank of the Allied forces. Some M4 Mediums were equipped with the Duplex Drive system (Sherman DD), which allowed them to swim using a collapsible screen and inflated rubber tubes. Along with this were the M4 Dozer (an M4 with a bulldozer blade), the T34 Calliope (mounting a multiple rocket launcher above the turret), the M4A3R3 Flame thrower (flame tank), and the Sherman Crab Mark I (a M4 Medium with a mine flail), as well as many other variants.

The United States eventually deployed the Light Tank M24, an improvement over the M3 Light Tank. The M24 had torsion-bar suspension, high mobility, and a compact 75 mm gun. Ergonomically the tank was quite good also. However, the M24 did not appear in combat until December 1944 and equipped only a few units by the end of the war.

Near the end of the war the M26 Pershing tank was deployed as the first operational heavy tank of the US Army. It was designated a heavy tank when it was designed in WWII due to its 90 mm gun, which was at the time the largest caliber gun found on a US tank. The Pershing was a very modern design with torsion-bar suspension, heavy armor, and an excellent 90 mm gun. However, it was somewhat underpowered, having the same Ford GAA engine as the M4A3. Intended as an improvement of the M4 Sherman, the prolonged time of development meant that only a small number saw combat in the European theater, most notably in the 9th Armored Division's dramatic dash to take the Bridge at Remagen. In combat it was, unlike the M4 Sherman, fairly equal in firepower and protection to both the Tiger I and Panther tanks. The M26 basic design was good enough to form the basis for all postwar American tanks through the end of the M60 series.

Evolution Of The American WW2 Tanks 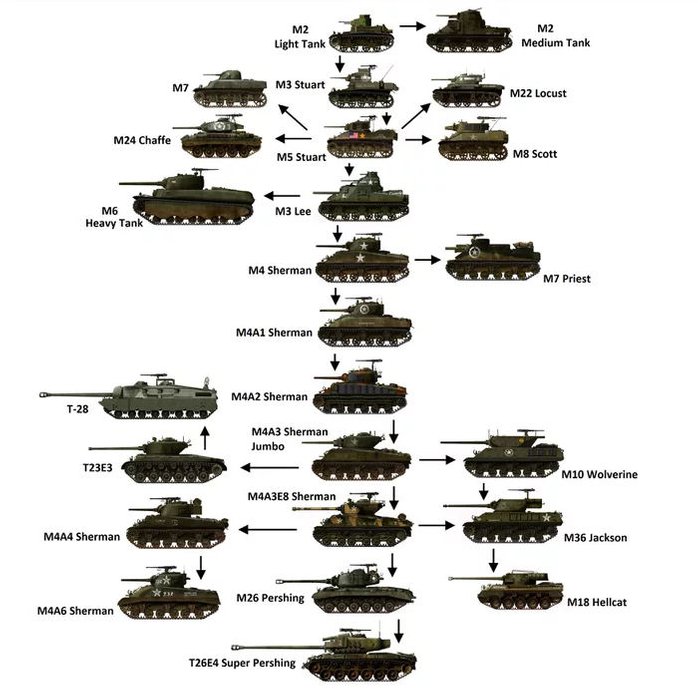