Constructing a diorama consist of phases while painting of the various models and figures can proceed in parallel. There is no single path to follow. Creativity, improvisation and ingenuity come along your journey of modelling with joy. Attend to an original image is just a direction, but don’t fear to diverge. Neither did I. I would rather say that the results became even better than was planned.

Sometimes a goal can't be achieved because of missing the resources or it just doesn’t work out the way you want it and for the sack of time... Everything is adjustable afterwards at later point in time. Although after placing the plastic soldiers for instance it would be harsh to accomplish. 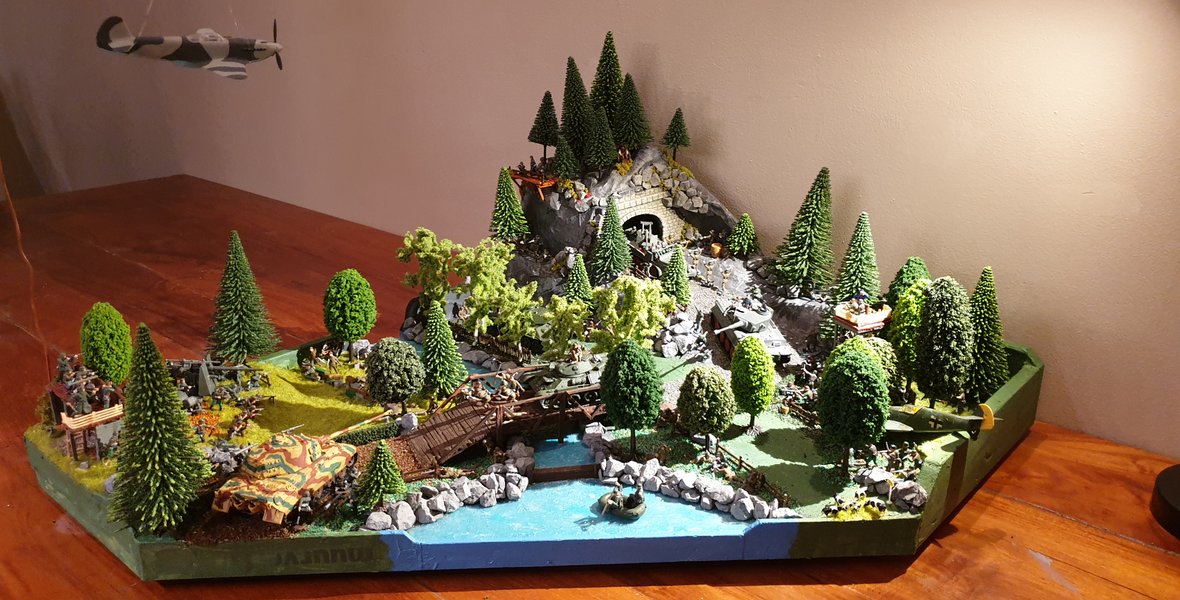 Having said that the steps are shown consecutive picture style to provide a clear idea of the development in different stages. Some choices were after all not very smart or questionable. However the finish counts. As the first real diorama it ain't that shabby. Remember that I had only 1 week to finish off the job.

Creatign an edge around the MDF board. I had a spare pentagon alike board. Considered that in one corner I would have some hills and other corners flat land including a river.

After the clue for the edges dried up, I situated models and figures in different position to have some measurement and aims of direction for roads, river, bridge, forest cluster, etc. A tunnel came to the mind as a must.

After taking decisions on positions and final river and lake marking, the plaster was poured on both sides. A not foreseen error was directly placing the underground for river and lake material. Paper and soggy plaster don't get along.

Reassessment was need to overcome the connection struggle of the river material on top of plaster. Wallpaper clue helped a lot, it remained, but apparently not the a correct final solution for next time. In the corner metal mesh was used to create foundation for the hills and covered with paper and clue.

I should not have use plaster in this case while rethinking and as my daughter suggested. We covered all with paper and clue eventually, inlcudign already the hills. Not much attaches to plaster. Another disadvantage is the weight of the plaster considering I also used wood and MDF.

After some frustrating moments with the river part that got fixed as well. Next I could swiftly catch up with the hills and tunnel. Construction part of the future bridge was also a nice development distraction as smalls stuff counts.

Dark gray paint on the rocks outside and inside of the tunnel. A halftrack vehicle is planned to appear in the tunnel entry.

Painting the lake's and river's banks and place aside dark gray gravel taken from the garden. Constructed a wooden dam alike.

Assembled a wooden bridge with a corresponding color. The spots left painted green to simulate a gras soil.

Enhanced with more gravel as rocks at various places on the board. Furthermore level up another corned for a German stronghold and paving paths.

Ergo, positioning the figures and models which are build and painted as parallel activity. Finally they can be fixed to the board to the convenience. Not compltely as at some parts trees are demanded primary.

Finally the fun part: trees, gras, etc. aka decoration. After this phase the final action is to connect the figures and models. Voila!

A week of hard labor has resulted in this diorama depict of a battle scenario between two mighty armies with supporting vehicles and even a flying airplane possible. A delight for the eye to check for every corner where are details hidden and no empty spot neglected. Next, please dispatch to the gallery of this battle scenario for (close-up) captions and according story line.