The Soviet Union started and ended the war with more tanks than the rest of the world combined (18,000–22,000). At the start of World War II the most common tank in Soviet service was the T-26 (derived from the Vickers 6-ton), lightly armoured and armed with a 45 mm gun capable of penetrating most German tanks at normal combat ranges. Few had radios. The design was mechanically sound although incapable of further development. The BT tank series, based on the Christie suspension system, were usually armed with the same 45 mm gun and were the most mobile tanks in the world at the time. Close-support versions of both tanks existed, armed with 76.2 mm howitzers. However, the BT was at the end of its design life. The Red Army also fielded thousands of light reconnaissance tanks such as the amphibious T-37 and T-38 tanks. These had limited combat value; although highly mobile, they were armed only with 7.62 mm machine guns and had very thin armour. The Red Army also had about 400 T-28 medium, multi-turreted tanks, which were in most respects equal to the German Panzer IV. Again, though, this design dated from 1931 and was obsolete.

The Soviet Union ended the 1930s with a huge fleet of tanks almost completely derived from foreign designs, but before 1941 developed some of the most important trend-setting tanks of the war. The problem the Soviet tank force faced in 1941 was not primarily the technical quality of its vehicles, but the very poor state of maintenance, the appalling lack of readiness, and the poor command situation brought on by the purges of the officer class. By 1940, the Red Army had adopted an advanced combat doctrine that its command structure and tank force simply could not execute.

Several excellent designs began production in 1940–1941. Just prior to the war, the Red Army embarked on two closely related projects to reorganize its mechanized forces and re-equip them with modern designs that took lessons learned from the Spanish Civil War, the Battle of Khalkhin Gol and the Winter War into account. Some of these designs were copies of other countries' designs. The most significant was the T-34, which was originally designed as the successor to the BT series. Its heavier armour and dual-purpose gun, made it one of the best medium tanks of the first half of World War II. The T-34 eventually took on the roles of many other Soviet tanks. The T-34's chassis made it usable after the war, as it could be continuously upgraded with heavier guns, new turrets and other modifications. The other significant design was the KV-1 tank. These were armed with the same 76.2 mm gun as the T-34, and had the same Kharkiv model V-2 diesel engine. The KV tanks were equipped with a torsion bar suspension and much heavier armour than the T-34. The KV was slow, intended as a breakthrough tank. The KV-2 close-support version was armed with a 152 mm (6.0-inch) howitzer. The KV series was the main Soviet heavy tank until 1943, with the end of production and the destruction of most surviving vehicles. Early in 1944, the KV's successor, the IS-2 was introduced. It was armed with a 122 mm (4.8 in) gun, with thicker armour and better mobility.

By October 1942, the general opinion was that Soviet tanks were among the best in the world, with Life magazine writing that "The best tanks in the world today are probably the Russian tanks...". The T-34 outclassed every German tank in service at the time of its introduction. At its height, production of all other tanks except the IS-2 was stopped to allow all available resources to be used exclusively for this tank, due to its widespread success in a variety of roles. The T-34 forced the Germans to adopt new, heavier designs such as the Panther and Tiger I, which in turn forced Soviet, American and British tank forces to upgrade their tanks further. German tendency to develop entirely new tanks toward the end of the war, rather than upgrading existing models, reduced the availability of tanks to German tank formations and helped the Red Army gain the initiative on the Eastern Front.

In order to deal with improved German tanks, the Soviets upgunned the T-34 in 1943, creating the T-34-85. This model had a much larger turret mounting an 85 mm (3.3-inch) gun and a larger turret capable of holding 3-men, which finally allowed the tank commander to concentrate fully on maintaining tactical awareness of the battlefield. The Soviets also introduced the 122 mm-armed IS-2 heavy tank, which had heavier armor than the KV while maintaining the same weight. Most of its armor was concentrated in the front of the tank, where it was expected to take most of its hits. 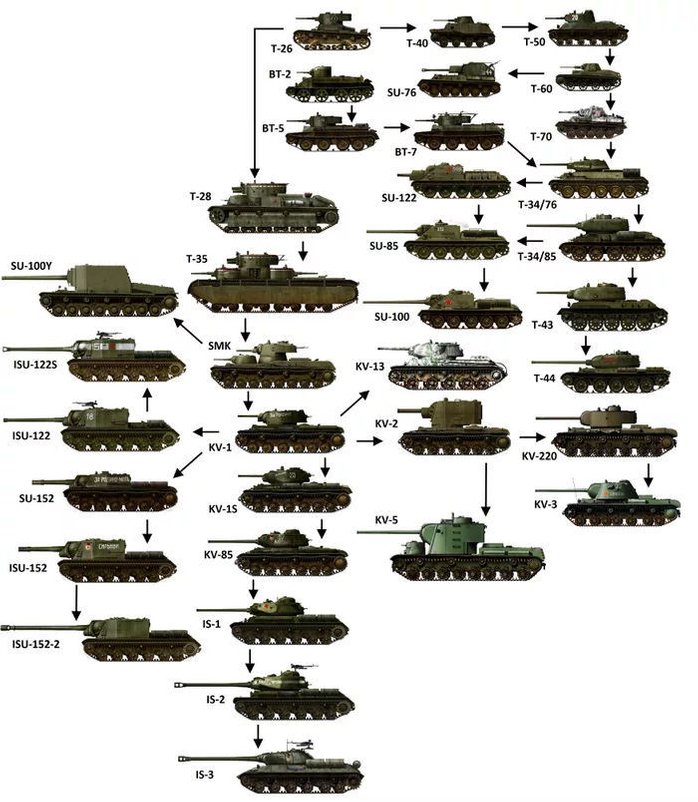